What is energy medicine?

Energy medicine is defined as a group of treatments that use energy fields for the diagnosis and treatment of physical and mental ailments. In 1977 the First World Energy Medicine Congress was held in Paris for the first time and since 1989 several thousands of physicians, psychologists, scientists and therapists have joined the International Society for the Study of Subtle Energies and Energy Medicine (ISSSEEM). In the United States, energy medicine has been officially recognized. In Germany similar organizations exist, like the Deutsche Gesellschaft für Energetische und Informationsmedizin (DGEIM). In the Netherlands, the Expertise Centre for Energy Medicine seeks to play it’s part.

Research is centered around the human energy field, called ‘biofield’ by most scientists. During the US National Institutes of Health Conference in 1992 the term ‘biofield’ was defined as ‘a field with no mass, not necessarily electromagnetic, that surrounds, penetrates and influences living bodies’. Research into biofields touches the areas of classical physics, quantum physics and biology, as the biofield has electromagnetic, fysiological and quantum properties and is in constant exchange with the (human) body.

Some methods of energy medicine have been subjected to good clinical studies and have some, or a lot of, scientific evidence base. This is the case with mindfulness, acupuncture and energy therapy. Other treatments have been less well researched. In the overview below, different methods are shown, without distinguishing by evidence base. The methods have been classified according to the underlying paradigm. 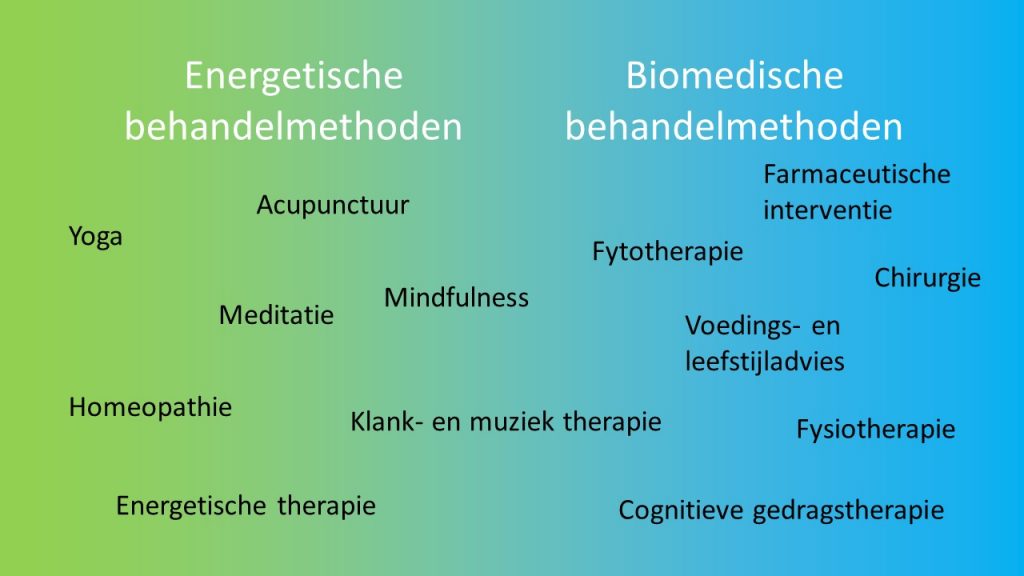